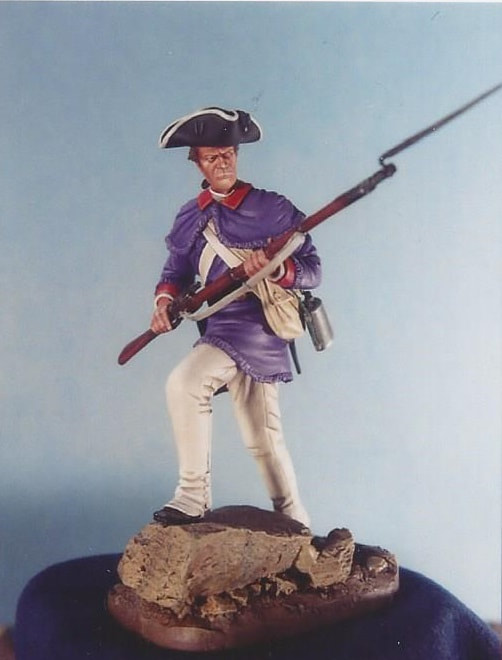 This was one of seven independent companies of one hundred men each which were authorized by resolutions of the Maryland Convention dated January 1 and January 14, 1776. James Hindman was commissioned captain of the fourth company on January S. Enlistments began January 20. The company was ordered to Oxford, Talbot County, Maryland, in March, and on July 26 entered Continental service, and began its march northward to the defense of New York. It saw service in the battle of Long Island and during the fall campaign of 1776 around New York City, fighting and camping beside Smallwood's Maryland Regiment. The independent Maryland companies acted together as one loosely organized battalion, with Major Mordecai Gist as their only field officer.The Maryland Council authorized the captains of the Independent Companies to clothe their men, at a cost not to exceed 13.5 for each man. Captain James Hindman's company was clothed in osnaburg linen hunting shirts dyed purple, with red cape and cuffs, buckskin breeches, and spatter-dashes made of black linen. They carried muskets, cartouche boxes, and some were supplied with cutteau knives.

The kit is all resin with resin detail parts and scenic base, comes unassembled and unpainted