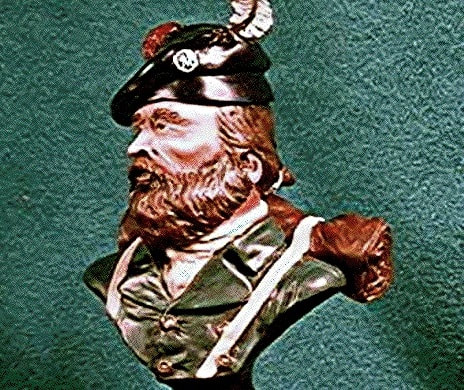 In January 1757 Rogers and his Rangers were given a mission to scout the Lake Champlain region near Fort Carillon and Fort Frederick. On the cold, gray winter afternoon of January 17, Rogers and 84 Rangers filed out of Fort William Henry at the southern end of Lake George for a long-range reconnaissance patrol to the northern French forts. During this scouting mission the Rangers set up an ambush of a French supply train and were discovered. Being far from home base with no support the Rangers began a withdrawal. During the retreat they were ambushed by Charles Langlade’s Canadians and his Indian allies.

This came to be known as the Battle of LaBarbue. Sergeant Martin was with the reconnaissance when during the battle he was wounded. Rogers and his Rangers were badly outnumbered and running out of ammunition. It was decided to retreat during the night unfortunately the wounded Martin was left behind in the darkness along with several other wounded Rangers that were missed. Although he was wounded in the mid-section he was able to struggle to the rendezvous point and survived the battle.

Kit offers two styled of hat, the beret as well as the leather helmet.