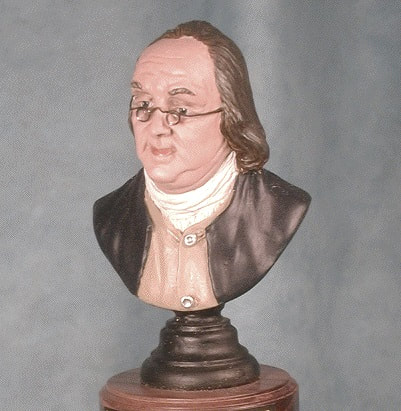 A major influence in the course of 18th Century history, Franklin is one of the most admired & beloved character from America’s past. His acute sense of logic and common sense was exhibited during his days as a author, printer and newspaperman. His scientific skill is exhibited in the fact that he proposed the model of electrical current still in use today. He also invented bifocal glasses and the Franklin stove.

His Patriotism and effort in helping to create a new nation was beyond question, although in his private life he was well known as a philanderer. He was one of America’s Founding Fathers. A man for his time.

The model depicts him in his middle age (1750-1760). Model is resin which must be assembled and painted